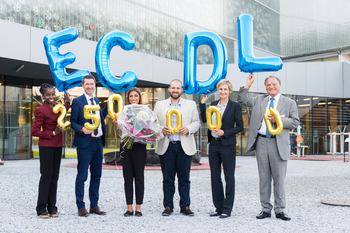 Sonia Afonso, student at the HSO commercial college, is the 250’000th ICDL candidate in Switzerland. Yesterday, she received her ICDL registration at a small ceremony during the ECDL Information Day at the Swiss Transport Museum in Lucerne.

Peter Grunenfelder, director of Avenir Suisse, presented Sonia Afonso with her ICDL ID at the ICDL Information Day. The 25-year-old was delighted to receive this honour, saying: “I’m convinced the ICDL certificate will benefit my career.”

In addition to this ceremony, highlights of the Information Day included Peter Grunenfelder’s talk on modernisation in Switzerland and Viola Dondo, executive director of the Computer Society in Zimbabwe, giving insights into the implementation of the ICDL in Zimbabwe.

Take a look at some more photos of the event.

Change of ownership at ECDL Switzerland AGECDL Switzerland AG was taken over by the international testing services provider PSI Services LLC (PSI) on 1 January 2017. The combination of the two companies will enable us to extend our product offering and solutions reach.